SAPSN Solidarity Statement on the conflict in Mozambique

Leaders and representatives of Social Movements and Civil Society Organisations in the Southern African People’s Solidarity Network, having met in a spirit of regional unity and progressive ideological clarity during a virtual “SADC Solidarity Summit with the People of Mozambique,” offer the following analysis and demands… 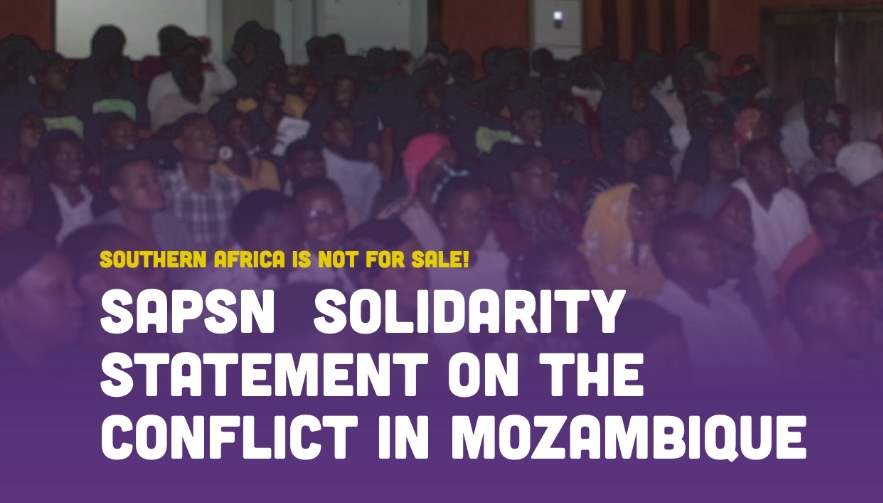 THE conflict in Cabo Delgado province, Northern Mozambique, is a natural resource conflict precipitated by the discovering and concessioning of gas deposits to multinational oil companies by the government of Mozambique, with complicit local elites lacking due regard for the human rights, developmental, and climate impacts on local communities. The leaders of SADC and the African Union have failed to meet the people of Mozambique’s legitimate expectations for a holistic, coordinated and timely response to the conflict, since its onset in October 2017. Only because of an attack on March 24 that led to the deaths of several expatriate oil industry and related service workers (and scores of local residents), did SADC leadership meet during April to plot what appears to be mainly a military response.

THE imminent approval of SADC’s military intervention by Heads of State may well further escalate the conflict, not only locally in Cabo Delgado but across the region, given the potential for insurgent blowback in Southern Africa’s vulnerable cities. Furthermore, the history of sub-imperial military interventionism by two main SADC armies, the SA National Defence Force and Zimbabwe Defence Force, shows a tendency to mainly protect elite economic interests (especially Johannesburg and Harare firms linked to the respective ruling parties, engaged in extractivist operations in the DRC and Central African Republic). This recent history, alone, renders both morally inappropriate to intervene in Northern Mozambique, especially on behalf of multinational oil corporations from South Africa, France, the U.S., Italy, China and South Korea. We also have concern about their roles in repressing their own countries’ civilians on their home turf, most recently to prosecute Covid-19 lockdowns with inadequate sensitivity to desperate conditions. Corruption and incompetence in the SANDF and ZDF are also notorious, and the poorly-paid Mozambican army itself was accused by many civilians of looting Palma after the insurgents departed. Given their records, as well as the neocolonial role of U.S. and Portuguese military “trainers”, the SADC intervention force is a recipe not for peace-keeping but for new types of conflict generation.

AN Islamic-extremism theory, added to a narcotics-trafficking theory, are usually advanced to explain the insurgency. These theories, especially as promoted by the U.S. State Department in recent weeks, wrongly define the problem. They sow the seeds of Islamophobia in Mozambique and in the region. Christians and Muslims have peacefully coexisted in Cabo Delgado, and elsewhere in Southern Africa, for centuries. As such we refuse narratives that obscure the roots of the conflict which are the militarist mode of enclave-based extractivism, which amplify existing social and economic inequalities and the standard accountability deficits evident across Africa’s extractive sector.

Watch a video short statement made by Boaventura Monjane

SOUTHERN Africa is not for sale. We condemn our leaders’ irresponsible granting of unaccountable resource concessions, tax incentives and investment deals. These deals between local elites and extractive industries
are exceptionally destructive throughout the region, as they violate rights of future generations to the natural wealth now being depleted by institutions with track records of corrupting African leaders. Through the extractive industries’ Illicit Financial Flows alone, several tens of billions of dollars are annually secreted out

of Southern African economies. It is partly for this reason that the “Right to Say No!” to extractive industries resonates in so many places.

OUR resources belong in the ground until we find socially, economically and ecologically sound means of utilising the minimal necessary mining and drilling that feeds back to the society and doesn’t harm the planet. While brutal extraction of timber, minerals and gemstones catalysed the unrest in Cabo Delgado, fossil fuels
in particular must be left underground, and this includes Liquefied Natural Gas (LNG) said to be worth $128 billion. The world is demanding historic actions to tackle climate change during the upcoming United Nations Framework Convention on Climate Change summit (COP26) in Glasgow. SADC leaders must not “hide behind the poor,” by claiming its fossil fuels aid development. Our leaders must play a responsible role and decisively shift the region away from fossil-fuel dependent economies – whether based on oil, gas or coal – and instead establish a well-integrated, job creating regional green economy of the future, utilising Southern Africa’s abundant solar, wind and tidal power, and non-extractivist energy storage systems (such as pumped water
and molten salt). These strategies are in their infancy but have enormous scope to grow, were it not for vested interests in Southern Africa’s fossil fuel sectors. The South African government’s recent decision to hire Turkish Karpowerships relying upon LNG-generated electricity for twenty years, at a cost of $15 billion, is an example of our leaders moving in the wrong energy-policy direction.

MOZAMBIQUE, and Cabo Delgado more specifically, has been disproportionately affected by climate- related catastrophes, in large part a result of heating in the Mozambique Channel. Hundreds of thousands of Mozambicans are still recovering from Cyclone Kenneth which devastated Cabo Delgado in April 2019, hitting the coast with an unprecedented 225 kph gale and sinking four ships at Palma. Cyclone Idai had killed more than a thousand people, flooded croplands and disrupted central Mozambique’s infrastructure just a few weeks before. Droughts have also ravaged Mozambique peasant farmers. Instead of a military intervention, Southern African (especially South African) and global elites must pay their overdue climate debt. We especially insist that reparations be paid to the people of Cabo Delgado and Mozambique, for the loss and damages caused by greenhouse gas emissions, extractivism and climate chaos in Mozambique and Southern Africa.

METHODS for fairly distributing such funds to the citizenry in areas affected by ongoing climate crisis should be identified by trustworthy local organisations, and not sabotaged by corruption-riddled states. Mozambique stands out given the lack of prosecution of ruling-party leaders implicated in the secret debt crisis, but the South African, Zimbabwean and Angolan states are also wracked by failures to weed out systematically-corrupt elites, including in their armed forces. We note that in 2019 and ever since, our activists have called for relief during times of climate crisis, but that the funding should at least temporarily be channeled through reliable civil society agencies given the danger of state capture of such resources.

THE humanitarian and human rights crises in Mozambique include claims of systematic police and military abuse, displacement of Cabo Delgado residents, unpunished rapes and torture, and in Palma today, state “hostage-taking” of 20 000 residents desperate for relief. These crises warrant the presence of SADC peacebuilding support, including a limited mandate to facilitate the evacuation of trapped civilians, allow the movement of humanitarian relief and create conditions for a genuine national dialogue.

MILITARY intervention is neither sufficient, nor is it the most suitable measure to resolve the resource conflicts in Cabo Delgado. SADC’s historic willingness to deploy its troops to safeguard elite economic interests, without addressing root causes of socio-economic desperation, is contemptible, and this history does indeed legitimate the Mozambique government’s stated concerns over national sovereignty. Southern African troops must not be reduced to the role of policing the economic interests of global capital and especially the fossil-fuel extractive sector.

THE extractive sector has tended both to espouse repression and thrive under conditions of conflict
in Southern Africa, dating to the slave trade, settler colonialism, apartheid and the post-independence neo-colonial minerals and fossil-fuel trade. This became worse during the 2002-14 commodity super-cycle, which we note with caution is reviving due to rising demand for several extractive industries including gas,
no matter than in the medium term all fossil fuels will be considered “stranded assets,” that are “unburnable carbon” if civilisation is to survive in coming decades. Many such conflicts invariably emanate from host communities losing their rights, livelihoods and natural resources for little tangible benefit. They often resist, and often women are in the frontline of fighting for land, water and social justice. We therefore demand – and will continue to seek accountability in the form of – reparations from the Extractive Sector for the violence,
loss, abuse, and violation of the rights of future generations that stems from inequitable resource extraction arrangements, unequal ecological exchange from South to North, and unjust expropriation of natural resources to benefit the few.

WE demand ACCOUNTABILTY for the theft, loss and deaths caused by the Cabo Delgado conflict, and the institution of a locally-led National Dialogue process under SADC and AU supervision – but with regionally- respected senior figures of integrity at the helm – to resolve legitimate grievances without resort to armed force.

WE insist that SADC leaders reconsider and strengthen frameworks for political and security cooperation, to enable robust coordinated responses to regional collective challenges. In particular, we ask for credible guarantees of safe passage and legal status for people fleeing the conflict from Mozambique into other SADC countries. We demand an end to the state-sanctioned xenophobia that periodically rears up in various SADC countries, as refugees from the region’s many sites of suffering – due to local repressive, geopolitical, extractivist and climate-related factors – cross borders in desperation.

WE call to attention the particularly severe impacts of the conflict on women, children and elderly

citizens who have been subjected to untold violence, sexual violations and hunger, especially in this Covid-19 pandemic era, whilst urging SADC to prioritise deliberate actions to safeguard and protect women, children and the elderly caught in the conflict.

WE urge SADC to limit any military intervention to a neutral SADC standby force with a clear legal mandate restricted to the purposes of peacekeeping and humanitarian facilitation. We remind of the abuses often recorded of peace-keepers from SADC, both at home and abroad. We also demand a cessation of the outsourcing of military operations to mercenary and private security contractors in the SADC Region, including those based in South Africa where regulatory systems are weak, judging by the way Dyck Action Group fired live rounds into Cabo Delgado’s civilian populations in recent weeks, and by the Paramount Group’s corrupting of at least one regional state (Malawi in 2014), leading to a military supply contract cancellation after a change of government.

WE join Justiça Ambiental/ Friends of the Earth Mozambique and members of the Mozambique Civil Society Alliance in demanding that Total and all transnational corporations, all purchasers and all investors involved in gas extraction in Mozambique cease all activities related to Cabo Delgado gas projects pending the just and acceptable resolution of the legitimate grievances of communities and the Mozambican citizenry.

We call upon SADC to strengthen regional transparency and accountability mechanisms given all these valid concerns. This will require the publication of all relevant contracts, and the establishent of minimum standards to regulate taxation, human rights (including future generations’ rights to access natural wealth), and corporate governance associated with Extractive Industries in Southern Africa, while envisioning and rapidly implementing a more balanced, post-extractive future for Southern Africa.

SOLIDARITY actions with the people of Mozambique are planned throughout the Region. These include both local and international solidarity actions:

• Embassy protests and engagement meetings to press for a coherent SADC and AU response;

• Boycotts and protests against extractive companies implicated in the conflict in Northern Mozambique;

• Interfaith prayers in unity and solidarity with our Muslim brothers and sisters;

• Mobilisation and distribution of humanitarian resources
to men, women and children affected by the conflict;

• Lobby and campaign efforts to put the voices and interests of the people of Cabo Delgado at the forefront of efforts to find lasting peace.

SAPSN is a membership-based network of national movements and people driven initiatives for social and economic justice in the SADC region. The Crisis Coalition in Zimbabwe chairs the Human Rights and Governance Assembly of SAPSN.Aliança Moçambicana da Sociedade Civil C-19 is a member of SAPSN.